The Origins of Regime Aegytianerrie Rectife with St Mark The Evangelist

While in Cyrene, St. Mark received a vision that he should go to Alexandria, around 42 A.D. By this action, according to Bishop Eusebius of Caesarea, as well as Coptic traditions, St. Mark the evangelist, who wrote the earliest of the four New Testament gospels, was the founder and first bishop of the Church of Alexandria, even before the Church of Rome was established.

In his landmark History of the Church , written in Greek about the year 310, Eusebius writes: “Now, they say that this Mark was the first to have set out to Egypt to preach the gospel, which he had already written down, and the first to have organized churches in Alexandria itself ” (Eusebius, HE 2.16.1). This information is supplemented by Eusebius’s Chronicle, where he places Mark’s arrival in Alexandria in the third year of Claudius’ reign, which would be AD 41-42 or 43-44. This is about ten years after the death of Jesus, traditionally held to be in AD 33.

The “Acts of Mark,” gives more details about Mark’s activities in Egypt. While the exact date of composition for the Acts of Mark is uncertain, these traditions are traceable at least to the late fourth or early fifth century. The are two streams of tradition within St Mark’s narrative. The first stream concerns Mark’s founding of the church in Alexandria. The second stream concerns Mark’s acquisition of mystical knowledge in Egypt, the country where Jesus spent his missing years and learned and honed his mystical abilities.

Mark upon arriving there found many of Jesus teaching already in practise and a church of sorts already established. The story goes this way: The day after receiving his vision to go to Egypt Mark arrived in Alexandria and came to a place called Mendion. As he was entering the gate of the city, the strap of his sandal broke, and Mark looked for a cobbler to fix it. As the cobbler was working on the sandal, he injured his left hand and cried out in pain, ‘God is one.’ Mark was surprised at this remake and asked how he knew that God id One God. The Cobbler replied that he had been taught this from birth. Mark healed the cobbler’s hand with the power of the holy spirit. To show his gratitude, the cobbler invited Mark to his home for a meal. There Mark began to preach the gospel of Jesus, telling the man of the prophecies related to Christ. The cobbler said that he did not know of these writings, though he was familiar with similar teachings and other similar things that Egyptians learned from childhood. The cobbler’s name was Iānus, pronounced Janus meaning duality or two viewpoints. However, before leaving Alexandria, St Mark ordained Ianus as a bishop. 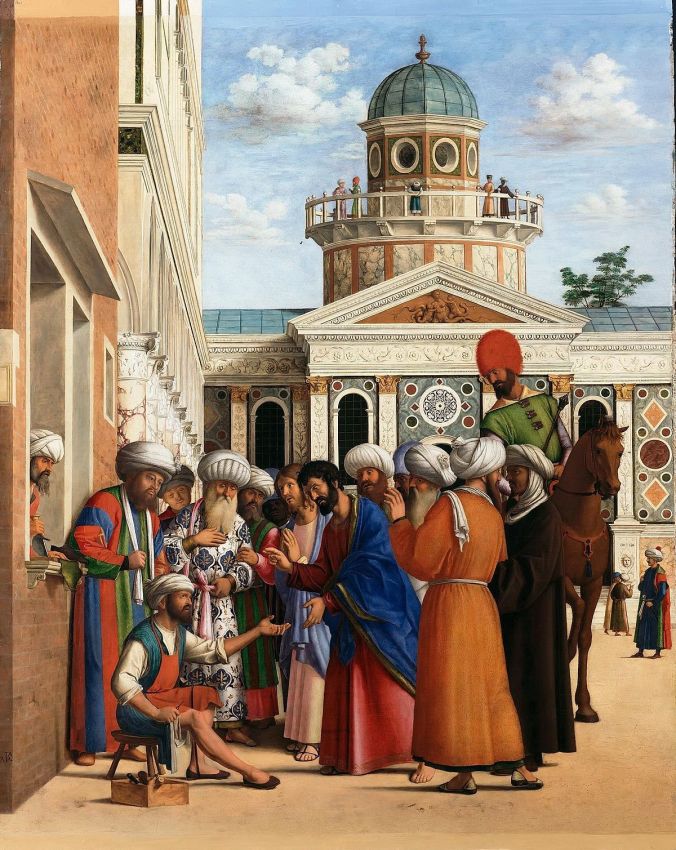 The Healing of Anianus by Cima da Conegliano

After two years absence, Mark returned to Alexandria to find that this spiritual community there had flourished, and a place of worship had been built in a place called Boukolou, near the sea. Many Christians traveled to Egypt in order to visit the evangelist’s tomb in Eastern Alexandria. Mark died on the most holy of Christian holy day’s as he also died at Easter on the festival of the Egyptian God version of Christ called Serapis Christus. The Emperor Hadrian refers to this pre-existing Christian Cult in Egypt as “..The worshipers of Serapis who are the Bishops of Christ…”

The Words on the book translated into English from Latin say “Peace prepares Mark the Evangelist.”

It is very interesting that the symbol of Mark the Evangelist is the winged lion as this is also the symbol of Mithras, a later form of Serapis and the keeper of the hidden mysteries.