Elisabeth created a mystical air about herself. She was deified as a living Protestant saint and a truly divine ruler. She took every opportunity to be seen as magickal. When she rejected the marriage proposal of the King of Spain, he threatened that there was ‘a wind arising in Spain that would wipe away her arrogance.’ To which Elizabeth replied, ‘But I command the winds and if I choose they will wipe away the might of Span in a night.’ After that very thing happened, when a storm destroyed his armada whilst it attempted to attack England, the King of Spain became superstitiously afraid of her for the rest of his life. 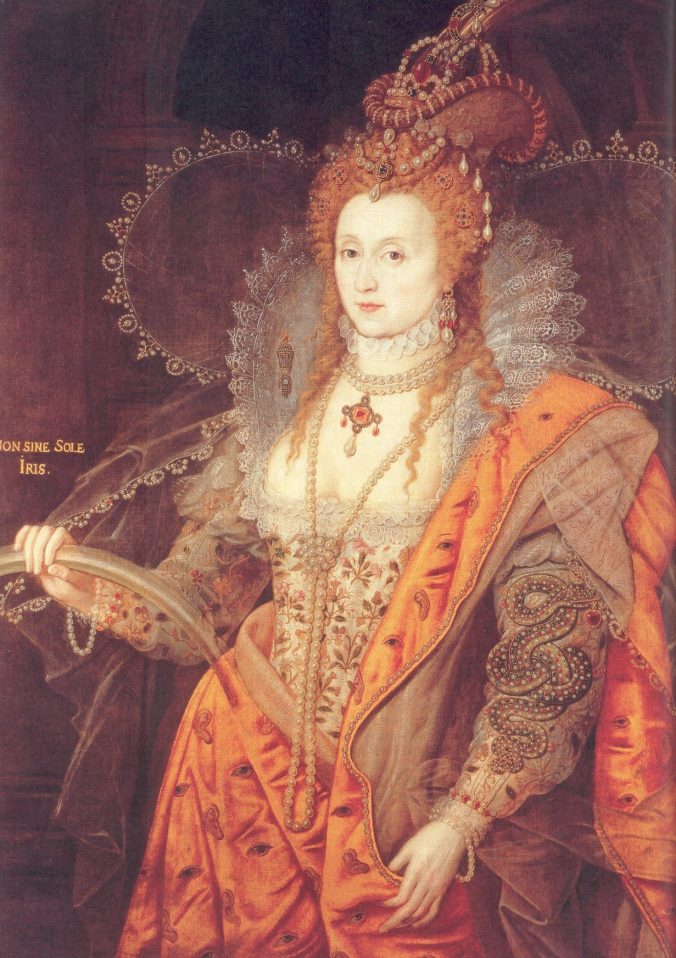 Her virginity was highly prized and highly praised by the people of England, and Elizabeth missed no opportunity to catch the veneration due sacred virginity. From the start of her reign she was crowned Queen of France added to and tales of her receiving her notification of her ascension whilst reading under a large and stately oak tree, alluded to the 900 year old Prophecies of Merlin” in Geoffrey of Monmouth’s “Historia,” the Sibyl, and the Venerable Bede. These legends had served Joan of Arc in her campaign one hundred years before and served Elizabeth just as well. They had foretold the coming of a maiden out of an oak-wood that would save her country. “It was said that after nearly a century of war this young maiden would unite her divided people and lead them to freedom.” The French mystic, Marie of Avignon, adapted this to her own country and added: that which had been “lost by a woman, should be saved by a Maid.”

Elizabeth acted as the Protestant replacement of the Virgin Mary in the newly converted England. Indeed many literary allusions were drawn between the many mythological or Pagan images of the virginal female deity and Elizabeth. She was called the Queen of Heaven, Diana, Cynthia, and Belphoebe amongst others, which added to the rich imagery of the pageantry of the time.

Thaumaturgic rulership where the king or queen, after their mystical coronation and anointing ritual, can perform miracles or magick, has a long history in Europe. The ultimate manifestation of the divine in Monarchy was the manifestation of spontaneous healings especially of Tuberculosis, swelling of the neck glands, and casting out of demons, with a touch of their hands. Elizabeth often quoted her ability to use this power as a sign that her much debated rulership was in fact ordained by God. William Tooker in his 1597 book “Charisma Or The Gift Of Healing,” site cases of Elizabeth exhibiting this divine power to the point where she even healed Catholics. The royal healing touch miracles made the public view her with extreme holiness.

Elizabeth experienced extreme glorification. She was the head of The Church of England and soon became the second maid in heaven as patriotic Englishmen shifted their affection for The Sacred Virgin to her. When the Catholics quoted St Paul In the Book of Corinthians saying: “Let your women keep silence in the churches: for it is not permitted unto them to speak; but they are commanded to be under obedience… let them ask their husbands at home: for it is a shame for women to speak in the church.” As reasons why she could not be the head of a church and should be married, Elizabeth countered with: “Honour the physician with the honour due him, according to your need of him, for the Lord created him.” Alluding to her healing touch being given as a sign of approval from God. Elizabeth was venerated as God’s handmaiden on earth. This aided the queen to justify her unmarried state, and when “this scriptural figure was turned to glorify Elizabeth; it fused prettily with her conceit that she was the virgin mother of her people, joined in holy wedlock to the state.” suggests the1939 book “England’s Eliza” by E.C. Wilson.