How did the Mysteries get from Egypt to Scotland?

Scota was the name given to the mythological/historical figure, who was the daughter of an Egyptian Pharaoh in Irish mythology and Scottish mythology. Though legends vary, all agree that a Scota was the ancestor of the Gaels, who traced their ancestry to Irish invaders, called Scotti, who settled in Argyll and Caledonia, regions which later came to be known as Scotland after their founder. According to the legends Scota brought a very powerful Pharaonic magickal tradition with her.

Scota appears in the Irish chronicle Book of Leinster.  However, the 11th-century ‘Historia Brittonum’ contains an earlier reference to Scota. In the Lebor Gabála Érenn it states that Scota was the daughter of an Egyptian pharaoh who married Niul, a Babylonian. He was a scholar of languages and was invited by the Pharaoh to Egypt to take Scota’s hand in marriage. Scota and Nuil had a son, Goídel Glas, the eponymous ancestor of the Gaels, who created the Gaelic language by combining the best features of the 72 languages then in existence. A prophecy is pronounced over Nuil, on the day of his wedding to Scota, that no serpent or other poisonous creature will inhabit the shores of the far off mysterious western island that he and his descendants would inhabit one day. Niul and Scota’s people were driven from Egypt by a later Pharaoh, and wandered around the Mediterranean until they reached Spain. From Spain they made their way to Scotland. Escocia Mágica.

Eventually, Niul and Scota and their children, traveled to the west coast of Scotland, battled and defeated the Picts, and became the Scottish people. This version of Scottish lineage can also be found in the Declaration of Arbroath, an important document written in 1320 by the barons and noblemen of Scotland. In the second paragraph of the document, it is written:

Most Holy Father, we know and from the chronicles and books of the ancients we find that among other famous nations our own, the Scots, has been graced with widespread renown. It journeyed from Greater Scythia by way of the Tyrrhenian Sea and the Pillars of Hercules, and dwelt for a long course of time in Spain among the most savage peoples, but nowhere could it be subdued by any people, however barbarous. Thence it came, twelve hundred years after the people of Israel crossed the Red Sea, to its home in the west where it still lives today. 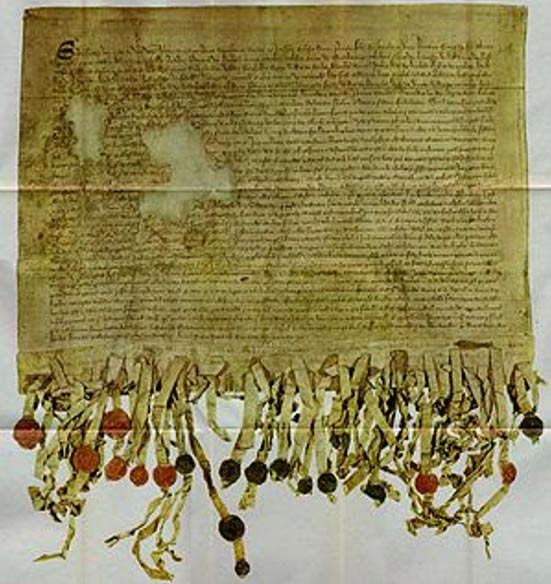 The Tyninghame Copy of the Declaration of Arbroath (1320)

Scota and the Stone of Scone
At the coronation of Alexander III of Scotland in 1249, Alexander had his royal genealogy recited generations back to Scota, highlighting Scota’s importance as the transporter of the Stone of Scone from Egypt to Scotland. She was said to be the linage holder of Moses and his Pharaonic High Ceremonial Magick, that he learned from the Egyptians and used to defeat them, to preserve his own people. Scota had used it to preserve her family alive when a usurper sort their death. It became the self-fulfilling prophecy that gave them their new kingdom. The Stone was thus seen as a magickal holy relic that conveyed the godly right to rule. All the kings of Scotland have received their coronation on that stone until 1296 when the Stone was captured by Edward I of England and taken to Westminster Abbey and placed under the throne of England.  In 1323, Robert the Bruce used the legend of Scota’s heritage and connection to the Stone in an attempt to see it returned to Scone Abbey in Scotland.

In Egyptian traditions, the royal line was matralineal. In the days befoer DNA testing you couldeasily prove who your mother was. The bloodline was often kept “pure” and defective, by marrying half siblings together. This was a common middle eastern practice and problem. The firstborn son of Pharaoh’s daughter became the next Pharaoh. If no son was born then the next pharaoh was a female additionally the surviving queen could become the next Pharaoh untill her child was old enough to assume the throne. (Cleopatra’s complaint to Cesar was the her brother, who was to rule and marry her when he came of age, was mentally deficient for this reason. Cleopatra reminded Cesar that she was already a wise ruler and a friend to Rome, supplying Julius Cesar with all the grain, and food his troupes needed for Rome’s campaigns,  and it would be better to keep her that way than have the scheming priests that controlled her mentally disabled brother plunge the two nations into war. Cesar up held Cleopatra’s traditional right to be Pharaoh.) The Pharaohs were taught a special brand of high magick , called pharonic magic.

Historical writers speculate that if Scota and her husband were a real royal couple that there 2 candidates for her true hitorical personage.  As the 3rd century BC source, Manetho’s Aegyptiaca suggests, Scota was actually Ankhesenamun, the widow of Tutankhamen. Her husband, on the other hand,  would be Ay, the successor, and the father of Tutankhamen. Due to religious conflict, Ay’s reign was cut short, and the pharaoh and his court were soon forced into exile. Like the Irish legends, Ay and Ankhesenamun wandered around before settling in Spain then to Ireland, and thence to Scotland. This legend is  similar to the tale of Meritaten the eldest daughter of Akhenaten and Nerfertiti. It is also interesting to note that the throne of the Stone of Scone is supported by effigies of the Egyptian Lion of St Mark. 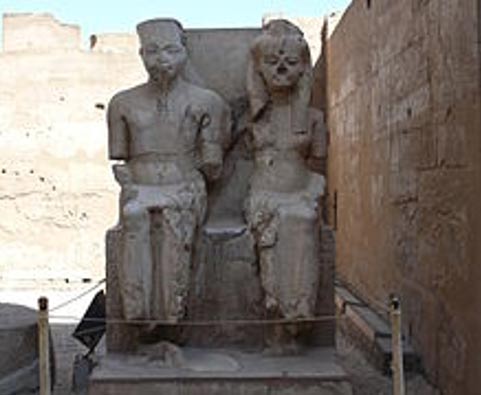 Above: Statue of Tutankhamen and Ankhesenamun, Luxor, Egypt.

Grave of Scota and Her Legacy
There is, however, enough historical associations with her, for Scota to be considered a ‘real person.’ Scota’s grave site exists and may historical personages have been recognized with less a memorial than that. The Scotia’s Grave lies in a valley south of Tralee Township, Co.

Kerry, Ireland. The area is known as Glenn Scoithin, “Vale of the Little Flower”, but is more popularly referred to as Foley’s Glen. A trail from the road leads along a stream to a clearing where a circle of large stones marks the grave site, as indicated by a County Council signpost on a by-road, south of Tralee.

Historically, heroic personages do grow larger with each retelling of their life but this should not be allowed to discredit the possibility that she was a real historical figure. Additionally, there are also traces of her in Scottish things that do not bear her name. High ceremonial lineages tied to Egyptian mysteries, science and architecture, do exist in Scotland. The Scottish lineages are the oldest of their kind that still exist in the world. They are set up to resist change, though doubtless change has occurred over time. Regime Aegytianerrie Rectife is one such tradition that is proudly far more Egyptian and mystical than most.  Shambhallah Awareness Centre proudly is the charter holder for this linage.