Samadhi (समाधि samādhi, Hindi pronunciation: [səˈmaːdʱɪ]) is a Sanskrit term for the state of consciousness induced by complete meditation.

The etymology of  “Samhadi” means moving towards an understanding of the interconnectedness of all things on an intellectual  or scientific level. i.e.  sam  meaning; together, integrated, even, towards, and dha  meaning; intellect, to get it, to hold a concept or something you love. 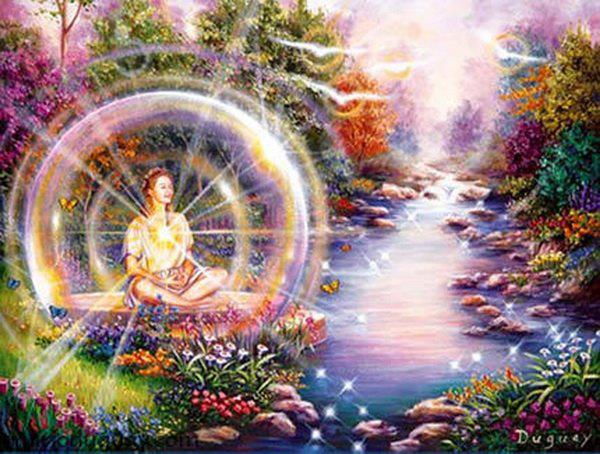 The ZiGi meditation that we teach is central to this and all acquisition of the siddhis.  It opens the 3rd eye properly, via a techniques that has been taught in our tradition for 20,000 years. Handed from teacher to student in unbroken lines, these techniques are the beginning of all other things. It is the doorway to the spiritual realms.

In advanced Samadhi, the side effects are observable. All attachment to the material world and all karma is dissolved. All awareness is withdrawn step by step from the physical, astral and causal bodies until self-realization or oneness with the soul is achieved. During this process, breathing ceases and the heart stops beating. (Some Gurus demonstrate this by being able to remain buried for weeks.) The practitioner spontaneously achieves better health as the body become sustained by Divine Grace. Deep empathy and connectedness with other people manifest as psychic awareness of them. Aware and fully conscious oneness is achieved in a most loving way, and all cells of the physical body are flooded with the Ocean of Divine Love and Divine Bliss. This may last for a moment of for hours, day or, weeks. It ceaces when the individual shifts their awareness from the cosmic back to the physical body. Miraculous happenings spontaneously occur in connection with the  Samadhi Enlightenment for the practitioners and and those around them. Samadhi practitioners may develop supernormal abilities called siddhis (abhijna), which is one of our goals here at Shambhallah Awareness Centre.

Note: The ZiGi Meditation and Samhadi Techniques are not just the normal lower levels of meditation. The ability to obtain positive results from meditation is much more difficult than simply just relaxing and meditating. This is where a qualified spiritual teacher is useful. Not just one who declares themselves so, but one who has demonstrated their mastery of their abilities over the years. This should be someone who you can be trusted to teach a meditator about the deeper workings of the mind.

The Vaishnava Bhakti Schools of Yoga define Samadhi as “complete absorption into the object of one’s love.” Rather than thinking of “nothing,” samadhi is said to be achieved only when one has pure, unmotivated love of something seeing it as part of the divine body of God.

Leaving the Body for Samhadi at Death

Advanced yogis can intentionally leave their bodies as a final attainment or soul-liberation. Mahasamadhi is a term often used for this intentional departure from the physical body at death. Karma is completely surrendered unto the Divine and dissolved into The Clear Calm Pool of Reflection. They can experience this as The Divine Ocean of Love washing over them. The individual returns to The Divine, merging into Oneness or Nivana.

of any supernormal physical effects as purported in the literature such as the breath and heart-beat stopping or any degree of conscious control during the event. Also absent are siddhis-like special powers as an aftermath although virtually all experiencers report they became imbued with a holistic and compassionate world view and no longer feared death.